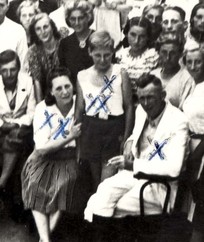 The strangest thing happened. I went looking for Selinger–a high-placed Nazi who protected my family for a while during World War II–and found Falkenberg.

Bernhard Falkenberg was another German transplanted to Wlodawa, the chief engineer of an ambitious drainage project. Serendipitously, I’ve happened upon war-era photos of Mr. Falkenberg with his wife and young son, and more miraculously, of the enormous drainage canal he was constructing. 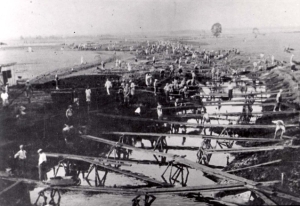 In a place where atrocities and war crimes were practiced on a daily basis, Mr. Falkenberg kept his humanity. He stubbornly protected his Jewish workers, writing phony work papers and issuing extra rations, warning them to hide before SS roundups, hiding others in the attic of his home. In 1942, he was arrested and sent to Mauthausen concentration camp.

In my WordPress blog, I’ve detailed much of what I’ve done. Like contacting the War Crimes Archives, filling out a sheaf of intimidating legal forms in German, and translating the fifty-year-old typewritten documents with the sometimes astounding, sometimes amusing help of Google Translate.

But outside of my family’s stories, Mr. Selinger has proved to be elusive; divorced, with no children, there are no photographs, no diary, no family to contact. Only some 55 pages of testimony gleaned from a vast, 2000 page cache of typewritten files on the town of Wlodawa. In those few pages, he describes the unimaginable horror of cleaning up after a German cavalry unit massacres his entire work force behind the stable of his glorious castle, pleads with unknown powers to prosecute the men who murdered his Polish farm manager, and protests that he had nothing to do with what happened to Falkenberg. After that, the trail goes cold. Mr. Selinger sinks quietly into history.

Still, over the past two years, comments trickled slowly into my “Looking for Selinger” blog posts. Men whose fathers were partisans in the forests around Wlodawa. A man who turned out to be a cousin. Last year, a journalist contacted me with interesting news. He is attempting to put together a documentary. It’s not about Selinger, it’s about Falkenberg. He is the Communist Schindler.

This past weekend, with trembling hands, I clicked on an unfamiliar email address. Half a century has passed since anyone showed any interest in his family’s courageous acts, he writes, full of emotion. It’s the boy in the picture.

In New Jersey, a woman writes a blog post. In Germany, a man reads it and writes back, holding the answers to seventy-year-old questions.