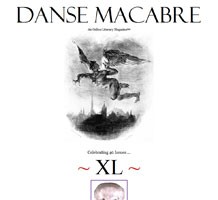 My first short story, The Partisans, is appearing online at Danse Macabre, an online literary magazine. I am reproducing the first two paragraphs here:

For generations, Lufts and Hellers had been next-door neighbors on Wirka Street, a polite name for a string of ramshackle wooden cottages at the southern end of town. Here, where civilization sputtered out before giving way to the deep primeval forests, Zosha and Zev’s parents were just the latest in a long line of Hellers and Lufts that stretched from the present back to the early 1700’s, two hundred years of eking out a hardscrabble existence, shoulder to shoulder, from the compacted soil behind the run-down houses that sat on the ever-shifting border between Poland and the Ukraine.

They knew each other in all the ways that brothers and sisters know one another. At the same time every morning, they set off to school, attired in sibling hand-me-downs; Zev’s oversized pants cinched tight around his six-year-old waist, Zosha’s blond pigtails in disarray because there was no one home to braid them. Often they would meet on the same errands, to the butcher, the baker, the tobacconist, the newspaper kiosk, dodging the press of older customers in the shopping streets that led up to the medieval marketplace. On holidays, she would peek between the railings of the women’s gallery to find him at the end of a line of his brothers on the main floor of the grand synagogue, usually in the process of being cuffed by his father for restlessness and lack of piety. Until Zev turned thirteen, Zosha was the taller and stronger one, and she took advantage of that fact, secretly tying the laces of his shoes together under a chair, or grabbing his cap and sailing it in a long arc across the muddy cobblestoned street.

For the rest of it, go to http://dansemacabre.art.officelive.com/default.aspx
Let me know what you think!

2 thoughts on “the partisans”